In my opinion, the gelato in Italy is the best ice cream in the entire world.  Since we arrived over three weeks ago, I have eaten more gelato than I’ve probably eaten ice cream in my entire lifetime.  We quickly realized that the gelato is best, freshest, and most likely homemade when it comes in silver containers with a cover as opposed to most of the gelato you see piled high upon itself in plastic containers (although it is tempting and looks more appealing, it isn’t as creamy or as flavorful).  Therefore, Dan and I are constantly on a quest to find the best Gelaterias with the silver containers and no matter which city we are in, we always find it.

Example of gelato piled high from somewhere in Florence.

Whether it’s from La Romana in Rome, Cremeria Santo Stefano in Bologna, or Gelateria Dondoli in San Gimignano; each experience has been equally as satisfying and uneventful as you can imagine getting ice cream usually is.  Little did I know that my gelato addiction would lead to a really confusing but hilarious (mostly for Dan) situation in Florence.

Dan ordering gelato in Rome.  I think I creeped this gelato server out.

The winner of all the gelatos in Bologna. 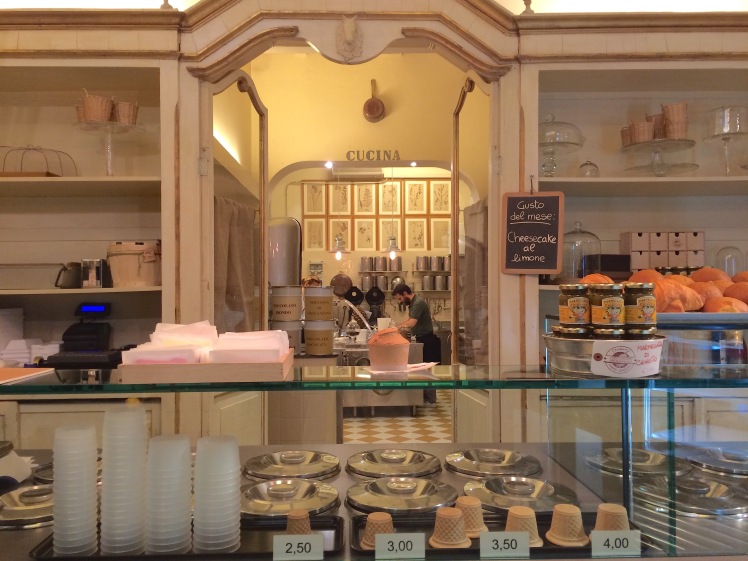 One night we decided to walk over to the famous Piazzale Michaelango for great views of Florence coupled with a sunset after spending a few hours walking around the Uffizi Museum.  Now, I’m not a huge fan of art museums so I couldn’t get the thought of getting gelato afterwards out of my mind (I’m trying to justify why I needed gelato in this moment).  On our way between the museum and Piazzale, I spotted a Gelateria with the silver containers.  Upon entering, I knew we had made a great decision based on the available flavors (I choose ricotta cheese with fig and almonds by the way).

As we moved down the counter to pay, a large group of tourists flooded the small Gelateria trapping Dan and I in the very back.  I started to get instantly irritated, I wanted to eat my gelato in peace and didn’t want it to start melting.  Trying to escape, I said “excuse me” in every language and way I know how.  No one was moving, clearly ignoring me being too focused on their own obtainment of gelato.  Dan and I exchanged a look and then simply started slowly pushing past continuously saying “excuse me” and “scusami” to no one in particular.

As I attempted to pass a rather large tourist who was standing so much in my way that I could not move forwards, backwards, or sideways, I said “excuse me” very loudly but politely and nudged past her.  As this happened, she turned and made the loudest, most dramatic and disgusting noise,  something like “Bleehhehehhegggg”.  It sounded like she was about to throw up slash choking.  I instantly assumed she was extremely bothered by my pushing past her in a crowd of people.

Now, let me explain something about myself before I describe what happened next.  I hate confrontation, always have, always will.  If someone I know or don’t know does something to upset or annoy me, I usually let it slide in the moment and let the person get away with whatever happened.  This leads to me usually venting about it to Dan or my friends later and/or realizing what I should have said or done.  Then, I proceed to get very mad at myself for not being more assertive, witty, and sticking up for myself.  Lately, I have started to become very sick of letting people walk all over me and for some reason, decided that this incident in the Gelateria was the time to do something about it.

As she made that nails against a chalkboard sound at me, I whipped around and snapped loudly “I said EXCUSE ME!”  This outburst lead to Dan slowly pushing me out of the Gelateria as he could sense my rage.  After we finally escaped, I turned around to rant to Dan “Can you believe that woman? How annoying and rude?!”  Dan smiled and said holding back laughter, “You know you wiped your gelato all over her arm right?”  Looking down to see one side of my gelato all smeared; shock, embarrassment, and the need to run far, far away all washed over me at once.

The one time I decided to stand up for myself was a complete flop.  It was a flop and was a time I should have apologized instead.  And the worst part is that I wasted some of my gelato.  The universe is cruel sometimes.  I spent the next 30 minutes worried if we were going to bump into her and obsessively played the situation over and over in my mind feeling more and more humiliated.

I guess the point of my sharing this story is to have an excuse to share my obsession for gelato, get the humiliation off my chest and explore how I should move forwards.  Should I continue to try stand up for myself?  Or should I retreat to my usual, comfortable way of not dealing with these situations? One thing I did know is that this would never scare me away from a Gelateria, that’s for sure.

I believe in situations such as this one, it probably would have been best to let it go.  What does me snapping at some random woman accomplish for me or for her?  I’m not going to change her or keep her from doing it again.  More importantly, I didn’t make myself feel better about it.  I wasn’t happier in the moments after I snapped at her (before I knew about the gelato wiping).  I need to be a better judge of situations where I should stand up for myself.  But also, choose times where it will actually matter and be beneficial for me and the other person I’m standing up to.

Next time, I’ll stuff my face with a spoonful of gelato instead before something pops out of my mouth that I’ll regret. 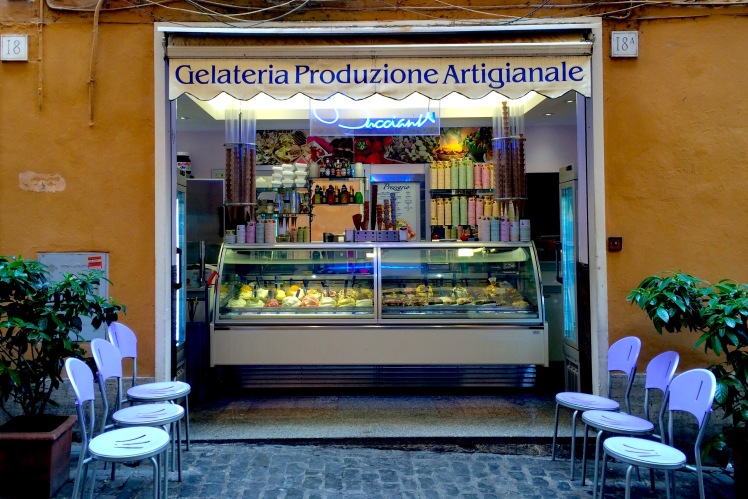