Have you ever had one of those experiences where everything goes so perfectly that you can’t even believe it?  That you feel something bad is bound to happen any second because the experience that you are living is ten thousand times better than what you built up in your head?

This happens to me less than I would like it to.  One of my faults is my high expectations. Of people, of situations, of experiences, of places.  It leaves me disappointed or neutral more than I would like to admit.  So, when Dan and I decided to finally visit Rocky Mountain National Park for the first time, my expectations were of course high.

The week before we spent a long time researching.  Being mid-May, there is still snow in the mountains and some of the beautiful lake trails with the grand mountain backdrops were still frozen.  Therefore, we wanted something with lower elevation that would still be equally as breathtaking.  Insert: Cub Lake Trail in Estes Park.

On Mother’s Day morning, Dan and I decided to spend it honoring the mother of all of us (Mother Nature of course) and we jumped in the car early to take on the 1 hour and 45 minute drive and to beat the crowds.   As we started approaching the park, I was basically bouncing up and down in my seat.  The views of the mountains are so enticing from everywhere!

First timers. We had to. 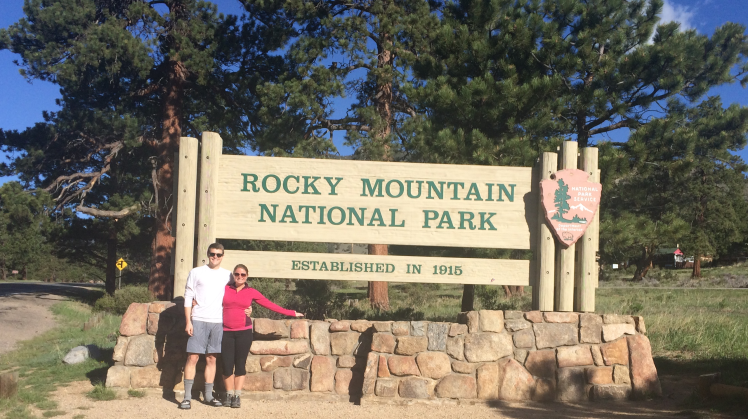 Upon entering the park, we purchased the American the Beautiful Pass which gives you access for $80 per year to all of the National Parks in the USA.  A small price to pay I think.

Cub Lake Trail is pretty close to the beginning of the park so we didn’t have to drive too far or deep in to arrive.  Spurred on by the lack of cars in the parking lot, we threw our backpack on (by we I mean Dan) and headed down the trail.

The road to Cub Lake trail.

As we set off, not 5 minutes into our hike, we saw 4 female elk grazing in the distance in a flat field.  This is the first time either of us had seen elk in the wild and just barely into our hike we were seeing amazing wild life.  We stopped, took about 500 pictures that didn’t really come out, and enjoyed their presence, respecting our distance.

This trail is very unique from other ones I’ve done as there are a lot of marshes and wetlands around it which definitely attracts wildlife.  Not 5 minutes after seeing the elk we were hearing noises of all kinds coming from the marsh – frogs, birds, ducks.  It seemed to be this magical utopia of bog wildlife.

Continuing on, the trail ascends a little bit (but really nothing too difficult) as you enter this beautiful aspen forest.  It was so interesting to see the landscape completely change from open meadow to wetland to aspen forest.

I couldn’t stop taking pictures of these beautiful trees.  I think I’ve found my spirit tree.

Prior to this hike, I’d seen pictures of Cub Lake obviously which is why we choose it but I was completely blow away.  The lake is full of these bright green lilly pads and the reflection of the mountains in the lake is just absolutely stunning.

As you can see, many of the trees were burned in 2012.  Sadly, there was an illegal fire, the biggest in Rocky Mountain history that caused a huge amount of damage to the entire area.  It was extremely difficult and maddening for Dan and I both to see beautiful aspens completely charred and pines trees withering away due to human negligence.  Thankfully despite the fire, life has continued to thrive here.

There was another big rock behind the one seen in the picture above that we saddled up on and enjoyed the view and a snack.  While we were eating, this little chipmunk appeared and would not leave us alone.   He came right up to me, sat under my leg, and I know he would have eaten straight from my hand.  Although a wild animal has never come this close to me before and it was really cool to see him so close, we didn’t want to encourage him to get so close to humans so we kept trying to shoo him off with no success. When it was time to leave our chipmunk friend, we continued on the trail to the top of the ridge which you can sort of see on the right above which gave us this incredible vantage point of the lake.

From here we turned around and headed back down the trail.  We were already so elated with everything we’d seen on this hike that we had no idea how much better it was about to get.

As we were headed back, we were approaching a group of 4 elderly people who said something to Dan that I couldn’t quite hear.  All I know, is that Dan just took off sprinting, without saying anything to me.  When I put two and two together, I realized that they said there was a moose in the marsh we had passed in the beginning.  So obviously I started sprinting.

We sat and watched this beautiful creature forever.  People came and went, took their pictures, but Dan and I couldn’t leave.  Neither of us had ever seen a moose in the wild and I couldn’t believe our amazing luck.  We basically watched him eat and eat and eat out of the marsh (moose apparently eat aquatic plants) but it was one of the coolest things I’ve ever witnessed. We later learned that the moose population was in trouble a few years ago but now due to conservation efforts there are 2,300 moose in Colorado alone with numbers rising 35% from just 2 years ago!  We saw one of only 2,300 moose in all of Colorado.

Okay, it can’t get any better than that, right?  Wrong.  When in Rocky Mountain National Park, anything is possible.

On our way out of the park, we encountered hundreds of female elk. HUNDREDS!  They were all together grazing in front of this backdrop.  I later learned that elk always stick with members of the same sex until mating season.

You can tell I researched a lot about moose and elk after this experience.

It took me a few days to process this experience.  I couldn’t and still can’t believe how perfect it was.  How beautiful the scenery and wildlife are in this part of the world.  My world! I live less than 2 hours from here… and will be back.