My first impression of Rome was.. not great.  To paint an analogical picture, it was like meeting a celebrity you’ve been dreaming about encountering and when you finally meet them, they give you a bad vibe.  They look so glamorous and interesting in pictures.  They constantly get rave reviews. But when you come face to face, their personality sucks or they weren’t all they were cracked up to be.  I came to this analogy while reading a book by Elizabeth Gilbert called Big Magic, who mentions that she never wants to meet her heroes anymore because of how they have been a major let down in the past.  Now, she keeps them in the safety of her imagination.  I wondered initially if that is how I should have kept Rome and maybe even Italy.  Was leaving my beloved South America for my Italian pipe dream a huge mistake?

All of these bad impressions came to me on our very first day.  Because it’s a long and somewhat boring story, I’ll keep it brief.  We took a very early Ryan Air flight from Madrid only to be met by tons of traffic and a worker’s strike at the Rome Termini Metro station preventing us from getting to our Airbnb.  After a couple of hours, we were finally able to enter the Metro but were extremely confused on which line to take and where to go (much of that due to our lack of Italian).  To make matters worse, it was crazy, crowded, grimey, and everyone kept bumping into me (or I kept bumping into everyone else with my enormous backpack).  Although it totally isn’t fair that I was judging Rome based on it’s transit stations, this was not the romantic image I had painted in my mind.

Later that night after taking a long nap at our Airbnb, we of course wanted to get out and eat some delicious Italian food we’d been pining for (one of the major reasons I’ve always wanted to visit Italy).  We were staying about a 30 minute walk from the Trastevere area so we decided to check it out (which is quite beautiful and charming as seen by the streets in the picture below).

The restaurant we originally wanted to go to needed reservations so we choose a different spot called Hostaria del Moro da Tony.  Dan and I have a new rule that we don’t eat anywhere where we are being solicited by the staff to come inside, and I seriously wish we would have followed that rule this first night in Rome.  Our meals there were horrible and I’m really not that hard to please food wise.  My gnocchi tasted like it was bought at the grocery store and the sauce straight from a Barelli can, I didn’t know about the “coperto” service charge, and there was a group of obnoxious tourists sitting next to us.  My big first Italian food experience that I had been looking forward to for so long was a big fail.  I was not wowed by Rome and definitely not the food either.  I began to feel disheartened after the first day and did what I do best.. jump to the worst case scenario.

Where we originally wanted to eat and did thankfully, the next night. 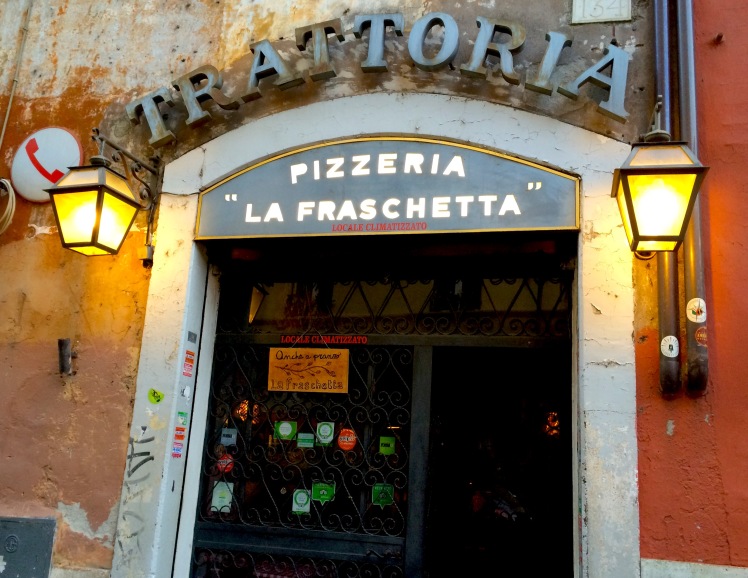 My big romantic Roman/Italian fantasy that I had built up in my head was not coming to fruition.  I tried very hard to tell myself that it had only been one day and we hadn’t even seen any history or any of the sights yet!  We had barely scratched Rome’s surface and hadn’t given it a fair enough shot yet.  So, in light of giving it the benefit of the doubt, I opened up my mind to Rome again and gave it another chance.

The next 4 days we spent in Rome were different than what I had built up in my head but incredible nonetheless.  We did finally end up finding delicious food in the form of wine (so MUCH fabulous wine), gelato (La Romana right next to our apartment was the best I’ve had yet), a great vegan restaurant called 100% Bio, tiramisu, and a pizza chain called Alice. (I’m positive there is exquisite Italian food in Rome but we just didn’t find it this time).

I still have dreams about this white wine. 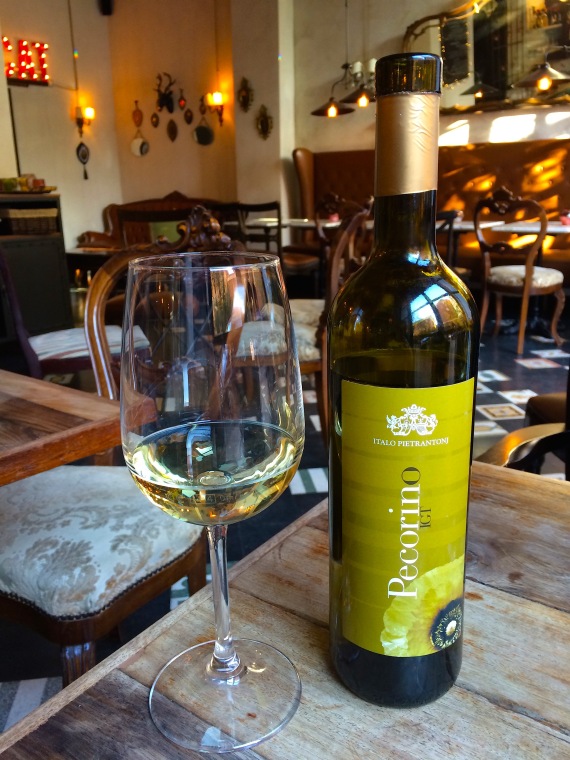 I never had that perfect, fresh pasta dish or the pizza that melts in your mouth, but there was so much else in Rome that made up for it.  Yes, Rome was very crowded and touristy but I can completely see why.  It is a beautiful city with gorgeous, narrow, cobblestone side streets and is a living history book.

We spent an entire morning walking around the Colosseum listening to a Rick Steves free audio tour.  Seeing the Colosseum for the first time as you are walking out of the Colosseo train station, is like nothing I can describe.  You slowly start to see the arches on the bottom and then are blown away when the entire structure comes into your view.  It’s absolutely incredible, and the history behind it, while very gory and disturbing, makes it all the more interesting. 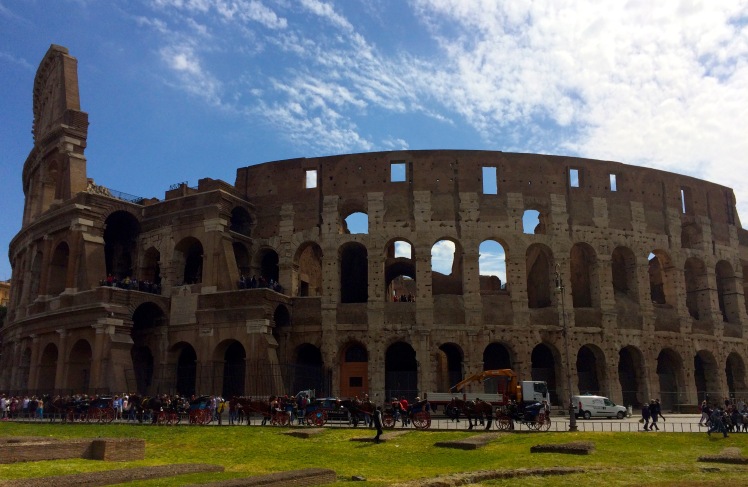 Listening to our boy Rick.

We explored the Roman Forum which was something I had NEVER heard about before coming to Rome.  To us, it was even more fascinating than the Colosseum!  We couldn’t believe that this entire part of the city that was so monumental, was at one time, buried underground until the 18th and 19th centuries!

We had cocktails outside of the Pantheon.  I mean, come on.  How many places in the world can you sit in a beautiful plaza and drink wine outside of a building that has been around since 126 AD?!

And we spent an entire late morning and early afternoon at the Vatican.  It was crazy and packed as we went on a Sunday while the Pope was there giving mass, but it was pretty cool to see someone I admire in person riding around in his Pope mobile (I should use “see him” loosely because I barely could make him out from behind all of the selfie sticks).  Seeing the inside of St. Peter’s Basilica was a great experience as well.  It is so beautifully ornate that I could have wandered around and stared at the gold plated ceiling for hours. 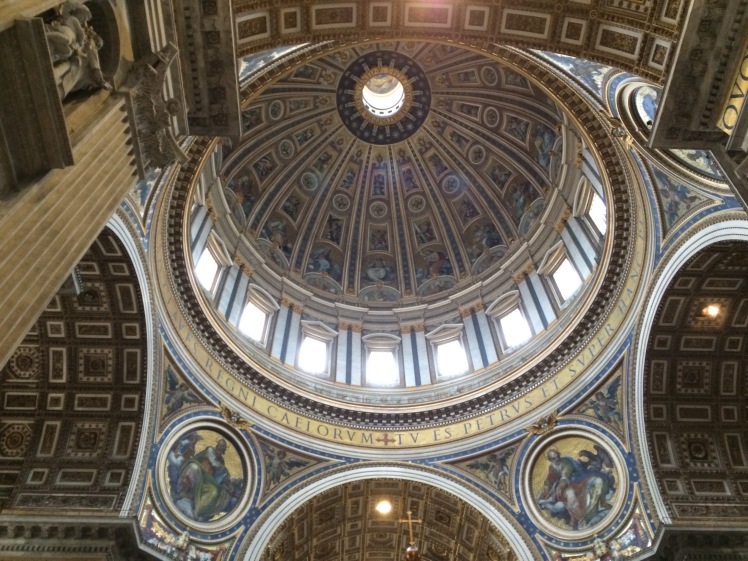 It’s safe to say that I’m glad I gave Rome the benefit of the doubt, and didn’t let a day of bad experiences ruin my entire opinion of the city (and subsequently question my entire reasoning for leaving South America).  Rome is in fact glamorous in its own rite and I would most definitely add to those rave reviews.  The pictures you see on all of the travel blogs, shows, and Instagram accounts don’t do it justice.

I always used to believe strongly in first impressions, that my gut was never wrong.  Which I still believe to some extent, as long as places, people, ideas or whatever it may be (basically all nouns) have a chance to prove and show their true selves.  I now believe that first impressions are not always the absolute truth and lasting impressions are what really count.