I am not typically not someone who follows strict habits because I tend to enjoy different levels and varieties of change.  I don’t order the same drink from Starbucks each morning; nor could I eat the same ham and cheese sandwich everyday for lunch as Jim from The Office or my own husband did.  I also tend to bore of things quickly which is why I decided to join ClassPass for example; a membership to various gyms and workout studios throughout the city of Chicago.  I prefer to switch things up.  I thrive on trying new things and having brand new experiences.  I believe this is a huge part of the reason why I am so passionate about travel.

As I mentioned in my Adios, South America! post, Dan has always wanted to visit Spain.  I on the other hand, really had no desire to return any time soon.  Although I loved each of my visits there and think about my experiences often, I craved to discover new countries in Europe instead.  I wanted to be thrown out of my comfort zone with a language, culture, and cities that I didn’t already know.  It wasn’t that I was bored of Spain but I was looking for something new.   Turns out however, that the cheapest and most direct flights out of Ecuador to Europe were to Madrid.

It was uncanny how suddenly my mind changed about going back to Spain once it seemed to be the most logical plan.  I felt so excited to be somewhere I was already comfortable in and couldn’t wait to show Dan everything I love about Spain.  We compromised and choose to spend 4 days in Madrid.  3 days sightseeing in the capital and 1 day in Salamanca where I spent a summer studying Spanish and taking too many chupitos (shots) at Juanma’s Bar.

Being back in Spain for me was like seeing that old friend you haven’t seen in years, but easily pick up right where you left off.  All of the sights, sounds of the Spanish accent, smells of cheese and jamón (even though I don’t eat meat now), and taste of Sangria came flooding back to me just as I remembered them as a 21 year old who was experiencing her first time overseas.  It was surreal being back in the country that had completely changed the course of my life forever.  Had I not studied abroad in Spain who knows if I would have volunteered in Nepal or gone to Peru on my honeymoon or traveled anywhere for that matter.

I had forgotten what a great city Madrid is.  It was a blast to see it through Dan’s eyes who was seeing and experiencing it for the first time.  After arriving on our first night, we barely had time to put our stuff down in our Airbnb before taking a long nap and then we were bolting out the door for tapas.  As is the Spanish custom, we went to more than one spot, savoring delicious wine, sangria, Spanish tortilla, olives, cheese, jamón for Dan and salmon for me.  Everything was great but it was just an introduction to how delicious Spanish food can be and how easy it is to find it in Madrid (especially after 6 months of not so great food in South America).  There are tapas and bars EVERYWHERE! 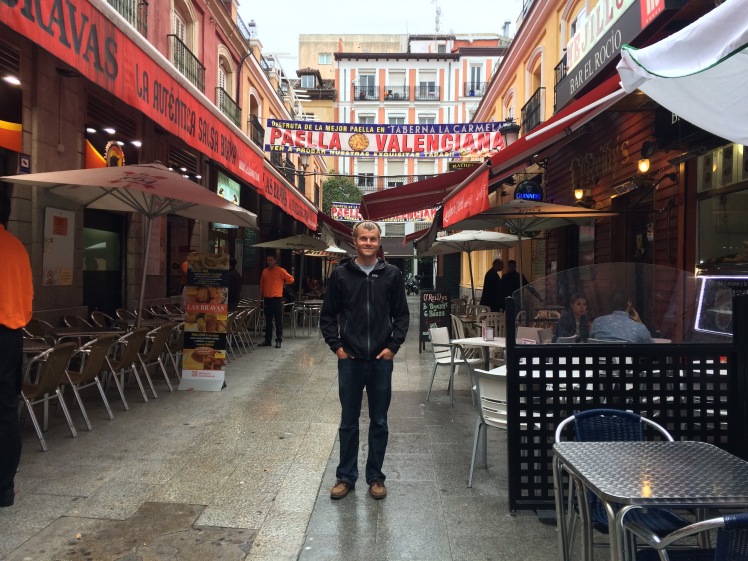 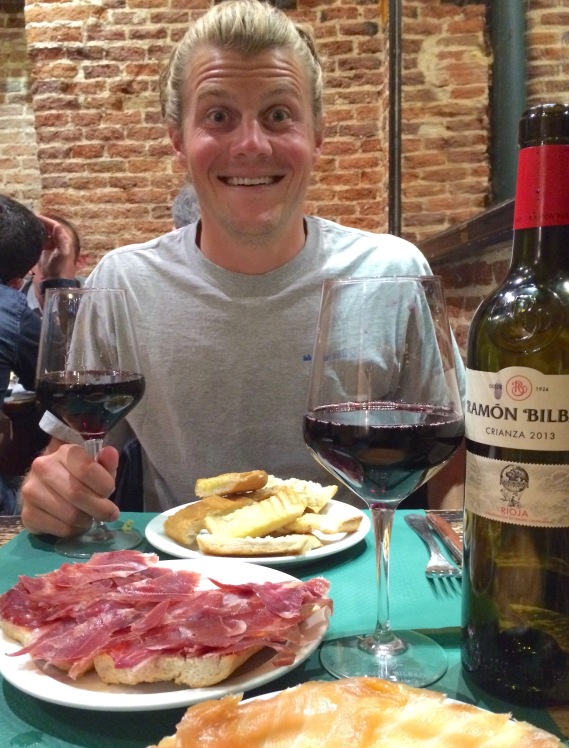 The next day we decided to wander around the city, take in the sights, and of course eat. We visited all of the main touristic places such as the Plaza Mayor, Palacio, passed the outside of the Prado Museum and Parque Retiro but nothing really compared to the tapas we ate at the San Miguel market.  Locals will tell you this place is really touristic (and it is) but the food is just so good.  (We were later recommended another market that is similar but less busy called San Anton but we ended up liking San Miguel so much that we went a second time on our last night).  There is vendor after vendor selling all of Spain’s most delicious fare – cheese, meat, seafood, bocadillos, wine, beer, pastries, olives.  It is a really fun experience which is made even better by a lively atmosphere which is something that is also very easily found in Spain! 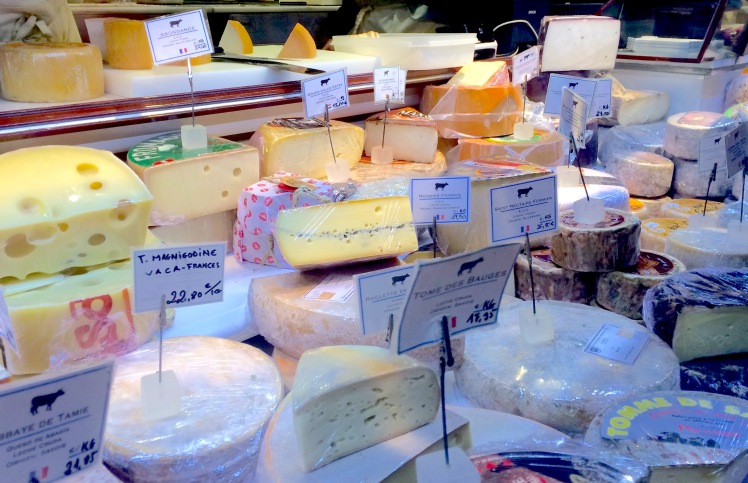 The following day we decided to take a free walking tour of Madrid to get some background and history on the sights that we’d seen the day before.  It was great seeing the city and hearing about the history from a local’s point of view.  That night we also discovered our favorite restaurant in all of Madrid (that we’d tried).  Taberna Los Huevos de Lucio in La Latina was everything I love about Spain wrapped up in a restaurant.  We grabbed a seat at the bar ordered some wine and I don’t even know what happened from there.  The restaurant started getting crowded with locals around 10 pm, we kept ordering glasses of wine, and the bartender just kept giving us free tapas all night.  Before we left around 11:30 pm, he gave us another (unnecessary for me at that point) FREE glass of wine.  This place was the perfect showcase for Spanish culture – lively, friendly, appreciative of great food and wine, and they love to have a good time.

“Us Madrileños cannot imagine a life where we are not outside enjoying ourselves” – our tour guide.

Me attempting not to just post pictures of food.

Our third day in Spain is when we visited Salamanca.  As we approached the train station, I started feeling nervous because it didn’t feel familiar for some reason.  Granted I was there 8 years ago and it was my first experience overseas.  However, as we started walking out of the train station and towards where I thought my host family lived, it all came flooding back in an unexpected way.  It wasn’t as though I was that 21 year old alone, navigating the streets, but I felt myself in my current state with my husband 8 years later navigating the streets I once walked down everyday for 2 months.   There was a surrealness and a disconnection from being in Salamanca as well.  I was pretty easily able to find my host families apartment, the locutorio (internet cafe) where I’d call Dan each day, the Plaza Mayor, and the building at University of Salamanca where I took all of my classes.

Dan asked if I could see myself and all of my friends at the time running around the plaza, drinking our sangrias to go but I couldn’t!  Those were extremely fond memories of course, but I could only imagine myself in my current state.  It was really fun to point out things to Dan and tell him stories of adventures I’d experienced there as we walked around, but I truly felt like this was OUR trip to Salamanca.  Not just my own walk down memory lane. I know that sounds weird and maybe I’m not explaining it well but it’s how I felt.  After showing Dan the city (it doesn’t take too long because it’s small) we ate a a restaurant and drank beers in the Plaza Mayor (two things I actually never did while I was there because of my lack of money).

View from the cathedral.

Circling back around to my previous point about not experiencing things more than once, I realized how stupid this is!  By doing this, I hold myself back from re-enjoying things that I like just for the thrill of something new.  It was SO much fun reliving old times in Madrid and Salamanca (we even found the restaurant that Matt, Rebecca and I loved and couldn’t find again on our trip there in 2010!)  It helped bring alive past experiences that shaped and formed me.  Additionally, Dan and I created NEW memories and had a completely different experience than I had the past two times I’d been there.  Just because I’m reliving something, doesn’t mean it will be exactly the same.  The thrill and excitement was still in Madrid the third time around.