The conversation goes pretty much the same every time we meet a new person.

New person: “Hey where are you guys from?”

NP: “City, State, or Country.  When do you guys head back to Chicago?”

Us: “Um, we are sort of on a long trip and aren’t planning to head back to Chicago afterwards.”

Where do I live?  I don’t know how to answer this question.  To me, we live wherever we are currently. However, if I say to this new person, “We live here for now” then they rightfully so get confused and think we moved permanently abroad. Lately, we’ve been saying “Chicago” to make it easier and not have to explain ourselves.

I’m seriously starting to dread this question and conversation because it makes me anxious. I’m starting to despise it more and more as time wears on and we get closer to the end of the trip.  It reminds me of the fact that Dan and I don’t have a place to call home right now.  Of course we have our parents and friends who would happily take us in but it isn’t permanent and it isn’t ours.  We still have to figure out what our next step is when we return.  We loved our time in Chicago but are looking for a change and are not planning on moving back there as of now.  Where are we going to live after this is over?  What are we going to do?!  We honestly both have no idea and yes, it’s a scary, unsettling thought.

Right now, we are technically “living” in Baños, Ecuador (until we leave for the next destination).  Baños is located in between the Andes mountains and the Amazon jungle, giving it a perfect spot for adventure.  Baños is frequented by tourists to go canyoning, white water rafting, bridge jumping, and potentially any adventure sport you want to partake in.  Additionally, Baños is an excellent location for relaxation as there are many natural thermal pools to soak in and restaurants to indulge in the food you’ve been missing on the road (vegetarian food, fresh ground coffee, a craft beer to name a few).  Coming from the Quilotoa Loop and heading into the Amazon next, Dan and I decided to dabble in a bit of everything.

We hilariously swam in the Termas del Virgen volcanic baths.  I couldn’t stop laughing during this experience because we were the only two young people and gringos in the whole place.  It was just filled with a bunch of old Ecuadorians, floating around in their swim caps, relaxing. 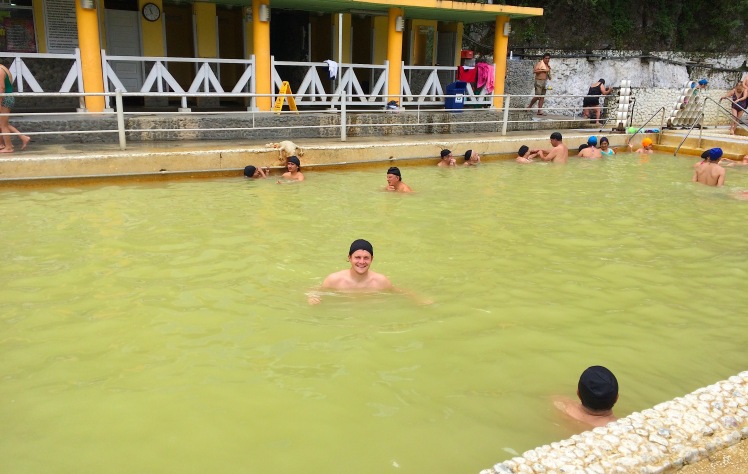 We took the bus up to the Casa del Arbol to try out the “swing at the end of the world”.  Really, I just needed the picture that I’ve seen countless times on Instagram.

Creepily taking pictures of complete strangers to get the full effect. 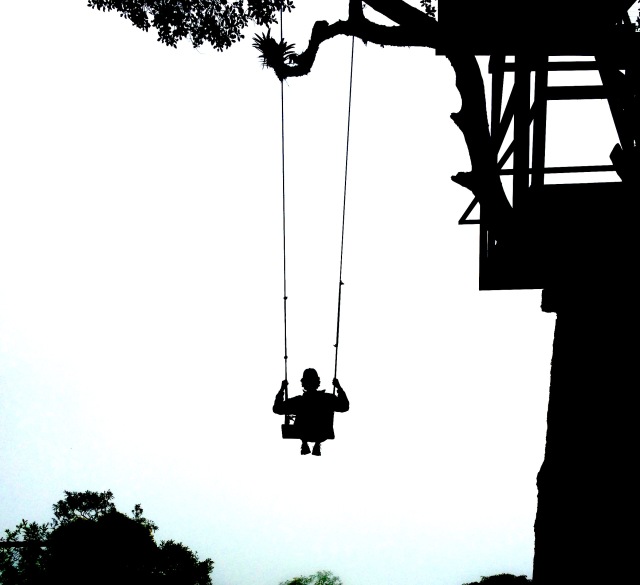 We even defied death by staying in Baños! (Not really) The Tungurhua Volcano is and has been erupting for many years.  Recently, the alert level for the communities near the volcano has changed to orange, the step before you need to evacuate.  Everyday, we can see the volcano pluming ash above the town and at night, people reported to have seen lava shooting out of the top!  Everyone we talked to said we have nothing to worry about as we aren’t even located in the direct flow of the volcano.  It doesn’t make it any less terrifying when you hear booms and crashes in the middle of the night!

We drank beer at the local watering holes (duh), spent way too much on a breakfast with amazing coffee, and even tried some of the local fare.

This pub lets stray dogs come hang out inside! 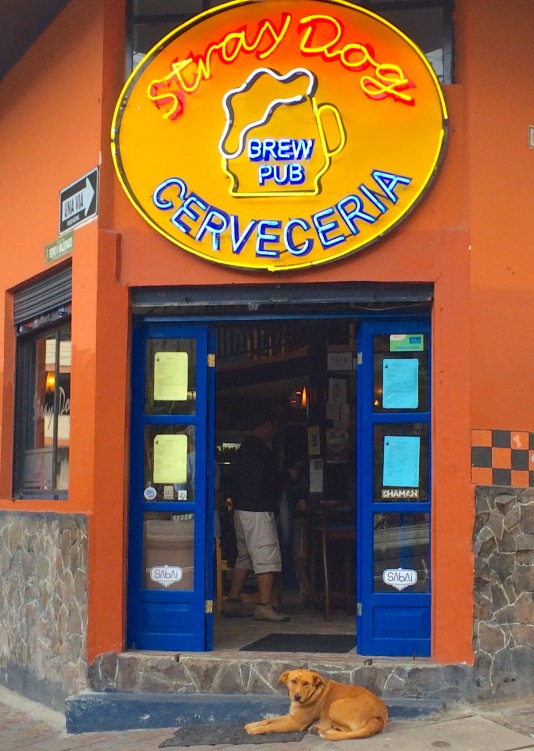 Taffy called Machala.  In my opinion, it tasted a lot better when I tried a piece that was currently being stretched because it was softer.  The package I bought to take home was very hard. 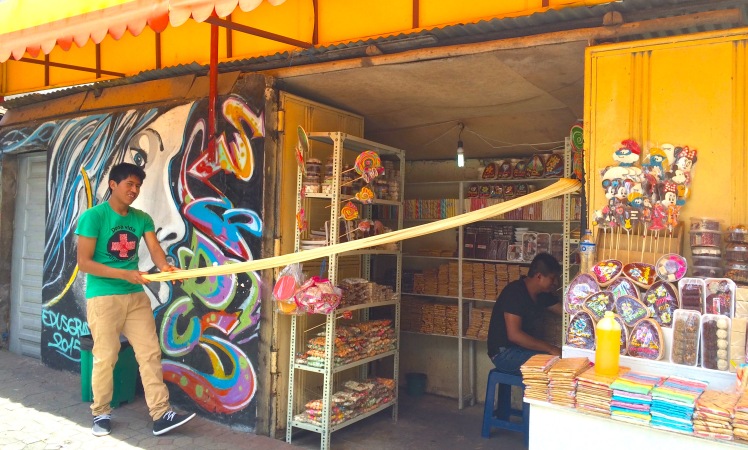 Because Baños is so well known for adventure, Dan and I wanted to do something that pushed us to our limits (besides staying next to an active, erupting volcano).  I had never been zip lining before so that’s what we agreed on to get our adrenaline pumping.  During our zip line tour, there was a group of about 5 or 6 missionaries from Indiana that joined us.  We made small talk with the mom, figured out where they were from, told them we went to IU and were previously living in Chicago.

As I was coming in from one of the zip lines, the mom of the group shouted to the other family members that weren’t previously there when we were talking, “They live in Chicago!”  Don’t ask me why I did it, I should have gone along with it, but I explained that we don’t currently live in Chicago right now.  Then the dad said, “Well where are you living then?” And I blurted out, ugh it’s so embarassing…  “IN THE MOMENT”.  They all laughed at me, Dan gave me endless crap for about an hour, but it answered their question, right?

I believe I am getting tired of explaining our situation to other people and thinking about what’s next myself; not to justify what I said because I’m not proud of it but that’s what I’m chalking my word vomit up to.  Later on, after pretentiously blurting out that I live in the moment (still cringing thinking about it), I realized that is actually my answer.  My subconscious sort of knew what it was talking about (although I wish I would have kept that to myself)!  I’m not going to tell people this when they ask where I live obviously but it is my internal solution to worrying about what’s next.

I should live in the moment.  Enjoy and show up to each moment.  Wherever I am, I should be ALL there instead of living in a hypothetical future world.  This adventure is already half way over. Do I want to look back and think that I spent way too much time worrying when everything will work itself out anyways?  Feeling anxious about what is going to happen to me in 6 months isn’t going to make the situation fix itself.  It’s going to keep me from living.

I have to trust that “Eventually you’ll end up where you need to be, with who you’re meant to be with, and doing what you should be doing”.

4 thoughts on “When Blurting Things Out Works in Your Favor”