After finding out the exciting news that our friends Nina and Zach were coming to meet us in Chile, Dan and I decided that the best idea to fill the 12 days between leaving Santiago and meeting up with them would be to rent a car and drive it north up the coast. We read about a few little beach towns that dot the Ruta del Mar that interested us, each only being approximately 2-3 hours from Santiago. Then after checking those out we’d end up in La Serena and the Elqui Valley.  Perfect!

We headed over to the rental car company, Chilean Rent a Car, that was the closest to our apartment and booked the cheapest option that would be able to get us where we needed to go.  The rate only ended up being about $35 USD a day.  I was actually quite shocked how easy it was for us to rent a car.  All they needed was a passport, driver’s license and credit card.  We were initially worried that they’d need an International Driver’s License, which Dan has but lost, but they didn’t even breathe a word of it.  Thankfully Dan also knows how to drive a stick shift because that’s pretty much all they had available as well. We booked our car (which we later named Buster) for 12 days and headed back to our apartment.

Because we were leaving in 3 days for this Chilean road trip, we figured we should do some research on some of the beach towns and book a couple of places to stay.  This ended up in failure as there was virtually no information about lodging options in these beach towns except a couple of really expensive hotels.  It also did not help that it is currently high season in Chile so we were left with slim pickings.  We both started getting frustrated with spending way too much time hunched over the computer screen with no luck.  So what did we do?  We choose to just wing it.  Show up, see if we like the vibe, find a place to stay, and decide how many days we’d like to stay.  Maitencillo was elected as the first town to check out and then I wrote down the names of a few others that were recommended along the way.  We left it at that and didn’t think about it again until the morning of our departure.

We showed up at 11 a.m. on January 18th to pick up our car ready with our tuna sandwiches and travel playlist for the trip.  Jamming out to more Justin Bieber than I care to admit, the drive to Maitencillo was really fun!  I thoroughly enjoyed watching the dry Chilean landscape go by and noticing instantly how many vineyards are SO close to Santiago!  We drove by the ocean a few times and a couple of other small towns.  Seeing a country by car is a very unique and freeing experience.

Pulling into Maitencillo around 3:00 p.m. we instantly knew we wanted to find a place to stay.  It is a small, quintessential surfer town with one main road along the beach and ocean.  The main road is lined with shops, restaurants, and cabanas (fyi – to find a place to stay, research cabanas, not hotels or hostels!)  It was pretty crowded since it was high season but it still maintained that laid back, non pretentious beach feel.  We began the song and dance of trying to find a place to stay almost immediately.  We’d pull up at any sign that said “Arriendo” or renting, cabanas, anything!  Dan would drive the car up and I’d run out and have to speak with the staff.  The first place we went had an opening in their cabana right across the street from the beach for 60,000 CLP a night (about $80 which is way over our budget).  I left him saying we might return and proceed for another hour and a half talking to other cabana owners in person, by phone, and even the hotel in town.  With no luck and just wanting to be on the beach, we decided to cut our losses and spend 2 nights in the first cabana.

I can’t stop laughing at the girl towards the right.

And now the guy and the dog.

Although we spent over our budget for a not-so-well maintained cabana, it was worth it to be right next to the ocean and have easy access to the beach for the next 2 days.  Long walks on the beach, runs in the mornings, a whole day in the sun, watching the surfers catch big waves and my personal favorite, sunsets with wine on the beach, were how we spent our time.  The ocean is pretty cold and the current is really strong (great for surfing) around Maitencillo but it really didn’t matter to us.  It was an overall success and I’d highly recommend Maitencillo for anyone traveling to Chile.

View from our window.

We ended up renting one of these for a day for 5,000 CLP because of Dan’s notorious, sensitive skin!

One of many sunsets with wine hidden in my green Nalgene.

After 2 days in Maitencillo, it was time to hit the road again and we were back in the same predicament as we were two days before, we had no idea where we’d stop or where we’d sleep.  It seemed to work out okay in Maitencillo so we were hoping for the best in another beach town along the way.  We first stopped in Cachagua which is maybe a 10 minute drive from Maitencillo along Ruta del Mar.  The beach was huge, clean, and pretty empty (it was a cloudy day) but there didn’t really seem to be anywhere to stay.  Cachagua seemed even smaller than Maitencillo and had a more sterile vibe to it.  I think if we had another day, I would have driven to this beach, spent the day, and returned back to Maitencillo.

Moving along, I received a recommendation that a town called Zapallar was really nice (only about another 10 minutes or so from Cachagua) but unfortunately we felt the same sort of air about Zapallar.  In Zapallar, we couldn’t locate an affordable place to stay and got the sense that it is a rich, posh area with huge houses overlooking the ocean.  We did get out of the car and walk around a park with pathways along the ocean (but Dan really had to pee so this didn’t last long), checked out the beach, and again headed out of town.

View of the path in Zapallar.

By this point I wasn’t feeling too worried and was thinking that the third time had to be the charm.  When we pulled into Papudo, again we weren’t as impressed as before with Maitencillo.  The city was nice and it seemed like there might be some places to stay but it just wasn’t calling to us strongly enough.  Then the same happened in Pichidangui.  The last stop we were going to check out along the Ruta del Mar was recommended to Dan from another Reddit reader, Los Vilos.  Driving straight to scope out the beach when we arrived, we were immediately put off by the huge factory on either side of the beach which was emitting an iron smell.  The beach in Los Vilos wasn’t as expansive and clean as the other beaches we’d seen.  Feeling pretty disappointed as we loved the vibe of the local area, we decided to drive the final 3 hours to La Serena.

View towards the city in Papudo. 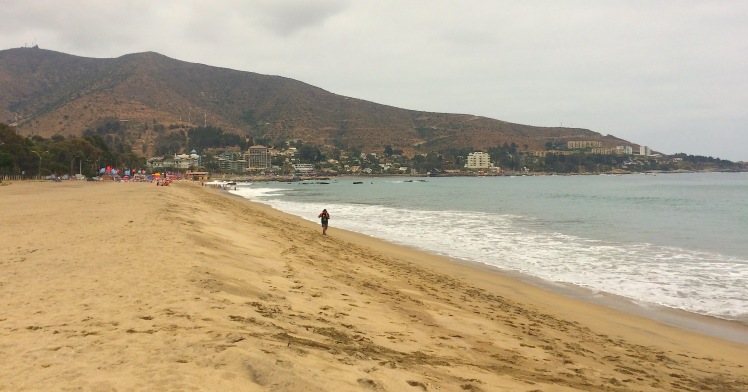 Behold the huge industrial factory to the left.

Although we didn’t find another small beach town we really liked along the coast was a bit of a let down, I was glad that we didn’t book any accommodations in advance.  We were easily able to pop in and out and didn’t waste time or money on somewhere that wasn’t really worth it to us.  I was still feeling very optimistic as we turned Justin Bieber back on and headed towards La Serena.