I realize calling the magnificent Perito Moreno Glacier “a block of ice” is probably kind of offensive and doesn’t actually do justice to how I felt standing in its humbling presence.  But Dan and I have been cracking bad jokes since we arrived in El Calafate and it only seemed fitting for the title.

I believe the bad jokes started (and continue) because we were trapped on a 30 hour bus ride to get all the way down here.  As you can see on this map below, we started 2 hours south of Bariloche in El Bolsón and opted to take the cheapest option (besides hitch hiking), the bus, to get all the way down to El Calafate.  Although I said cheapest option, it wasn’t cheap at all.  We coughed up about $160 each to ride all the way down here.  I’m not sure if any other bus companies make this trip but we rode with Taqsa Marga which had semi-beds and fed us lunch, dinner, and a muffin and coffee for breakfast.

We choose to take this crazy long bus ride for two reasons.  One was to see the Perito Moreno Glacier as I had mentioned before and the other was to get to El Calafate as a jumping point to visit El Chalten.

Upon arrival in El Calafate, it is evident that this is a very touristic place (I later learned that 97% of the population works in the tourism industry here!) The prices are higher than anywhere I’ve been in Patagonia yet – $22 USD for a dorm bed without breakfast, $13 USD for a sandwich in a restaurant, and so on and so forth. After we had our extremely expensive sandwiches, I was truly starting to doubt whether we should have stopped here or not.  All this effort just to see a glacier?  But since we made the trip we booked a tour to Perito Moreno through our hostel, Del Glacier Hostel & Suites Libertador.  There are many ways to see the glacier (taking a bus on your own to the park, ice trekking, etc.) but we choose to do a tour with a guide for $590 Argentine Pesos a person.  We wanted to soak in as much as possible since we made the long, expensive trip down here to see this thing!

That morning we were picked up around 8 am and were skirted away on the back, dirt roads to Perito Moreno.  It was very interesting to see the pampa and many of the estancias that are located on this “old” way to the National Park.  On the way we stopped at this beautiful estancia called Rio Mitre.  The views were absolutely stunning and they had a variety of animals just running around freely.  This is exactly what we expected Patagonia to feel like and wished we could have spent at least the night here.

Making friends with the locals.

These guys didn’t take to me as easily as the guanaco. 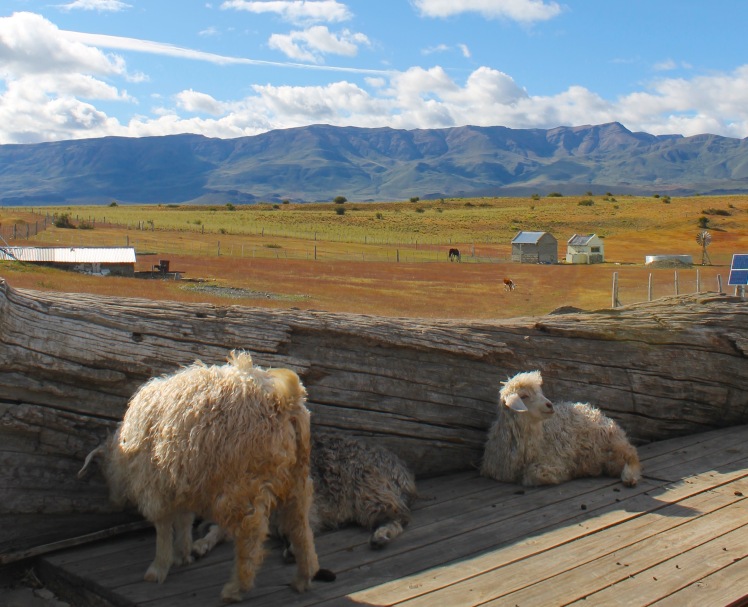 After stopping at the estancia, we continued on our way to the National Park.  At the entrance, you have to pay another entrance fee that isn’t included in the cost of the tour which is $250 Argentine pesos a person.  At this point, I was really shocked at how much we were spending just to see this “block of ice”.  I tried to keep the faith and not let the costs get to me.

As we were winding through the roads towards the National Park, our guide finally said, “Look out to your right and you’ll be able to get your first glance of the south end of the Perito Moreno Glacier”.  As I turned my head, I couldn’t believe my eyes.  Even from afar, I’d never seen anything like it.  We descended from the tour bus and walked down towards the lake that the glacier sits on to snap a few pictures and get our first glimpses. 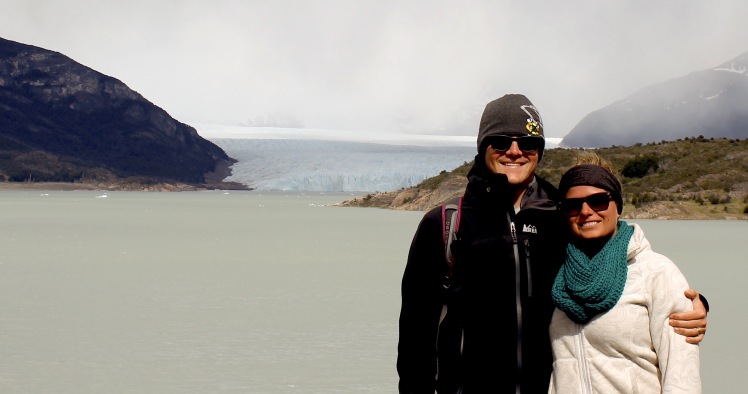 From here, we had the option to take a boat tour for 1 hour that takes you as close to the glacier as possible for an additional 200 pesos a person.  Even though it was December 23rd, there was a long line of people to buy these tickets but Dan and I knew that we’d want to see the glacier up close and personal.  When would we ever have this chance again?  The boat ended taking us close to the glacier, but not so close that if a huge ice chunk fell into the icy water, we’d be effected.

The glacier looks like something from another planet.  This MUST be what the far away planets like Neptune look like on their surface.  I also thought from this particular shot below that Perito Moreno kind of looked like Queen Elsa’s castle from Frozen.  It was just so incredible that I was trying to make some kind of association with how to describe it.

If you look very closely, there are ice trekkers out there!  It is only possible to trek on parts of the south face of the glacier.

This shot was taken as we were driving away on the boat again from the south face.

After the boat ride, we were taken to the main part of the National Park.  There are many paths or “pasarelas” in which you follow along and can see the glacier from many different angles.

The entire glacier is about 97 square miles, 3 miles in width, raises 240 feet about the Lago Argentino, and is over 500 feet deep below the surface of the lake (which I thought was the craziest part).  It is extremely unique because it is still growing (about 7 feet a day)!  One of the only glaciers in the entire world to be increasing its mass.  It is a UNESCO World Heritage site and the National Park is highly protected by the government and the people. 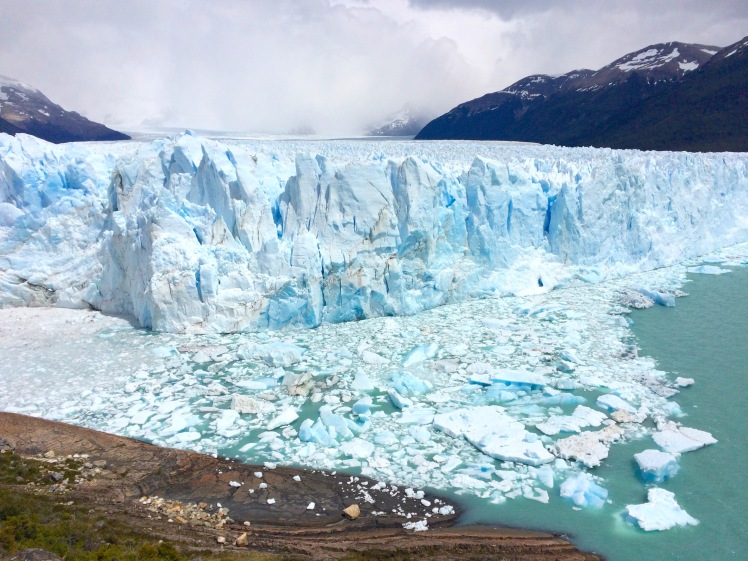 Another interesting fact about this glacier is that it ruptures every 4 or 5 years which sends enormous chunks of ice into the lake.  Because this glacier is increasing in size, large amounts of pressure push against the lakes and dam the water which causes this to happen.  The last recorded rupture happened in 2012 so we unfortunately will miss this amazing experience.

To try and show the sheer size of this glacier, I attempted to capture this picture with a boat in the frame.  The glacier makes the boat look so miniscule.

Towards the end of the pasarela, the sight of Lago Argentina pops into view and it is just as breathtaking.  The water is this perfect blue, green color that is created by it being very pure, fresh water from the glacier and light from the sun.

Although it was a rough ride down here and we’ve been spending an arm and a leg, it was completely worth it to see Perito Moreno.  To be awed and humbled by nature is truly a gift that I don’t get to experience often enough.  And when will I ever see something like this again?  Probably, most likely, never.

Merry Christmas and Feliz Navidad from these two bobbleheads and the amazing, magnificent 97 square mile block of ice.